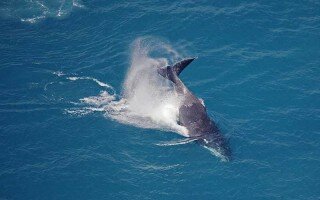 Humpback whale gestation takes eleven months. Calves are born at a length of four to five metres and a weight of two tonnes.  After birth, the mother will provide nearly 240 litres of milk per day for the calf, feeding the calf for nearly a year.  The milk is extremely rich at approximately 40-50% milk fat and the consistency of chewing gum. Humpback whale cows have two mammary slits, and feed on demand by exerting muscular pressure.

By the time the calves are weaned at 11 months, they will have doubled their length to about nine metres. For the first few weeks the cow and calf are rarely more than a few metres apart.  The calves are suckled for a further eleven months, during which time they have nearly doubled in length to nine metres.  Cow calf pairs keep mainly to themselves, with the exception sometimes of a primary escort, thought to be a male.

Sound is of tremendous importance in humpback communication, and they are thought to produce approximately 640 different vocalizations.  Male humpbacks “sing” complex songs comprised of verses and sets, but females and calves also communicate by sound.

“There’s a lot of very close tactile relationship goes on between a cow and a calf” says Micheline Jenner, from the Centre For Whale Research.  ” That’s the strongest bond in humpback society. It’s very interesting to watch they are quite beautiful. They swim very closely together, the cow will remain horizontal at the surface resting and the calf will often lie perpendicular to her, under her chin, underneath the water. Or actually, sometimes we’ve seen a calf actually caught under the flipper of an adult humpback whale. That looks really funny when you see a calf sort of stuck under there and the female will just remain still and the calf will then sort of scoot out from underneath the flipper and then pop to the surface like a cork, take a breath and then dive down again. And then they position themselves right across the underside of the belly. At other times you can see a calf lying on the head of the female and you can see the females, the cows are really quite patient and I guess that’s how mums are”. 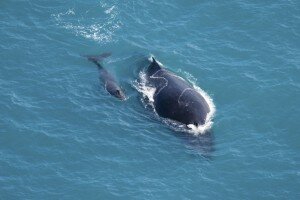 The east and west coast populations of Humpbacks occupy discreet feeding areas in the Antarctic, with little overlap.  Western Australia’s Breeding Group D, or Group lV population of Humpback whales makes one of the longest migrations in the animal kingdom, a journey of nearly 13,000km return, from Antarctic area lV, between 70° and 110° E.

According to current literature, it is thought that cows calve every two or three years.  The cows and primary escorts rest at several points along the coast, including Rottnest Island, Exmouth and Pender Bay, finally arriving in the Kimberley around the middle of June.

Mating and birth for Humpback Whales occurs in tropical waters, somewhere between June and November, when water temperatures are at least 25 degrees celsius.  Calving is thought to take place at night, but it is an event that is very rarely witnessed.

For the first few weeks the cow and calf are rarely more than a few metres apart.  The calves are suckled for a further eleven months, during which time they have nearly doubled in length to nine metres.  Cow calf pairs keep mainly to themselves, with the exception sometimes of a primary escort, thought to be a male.

After calving in the pristine Kimberley waters, the cows spend several months with their calves, before making the return journey to the Antarctic waters.  Some cow calf pairs remain in the calving grounds until the end of November.

Very little research has been done in the Kimberley to date.  Currently research is being carried out by ourselves, Kurt and Micheline Jenner, Chris Burton, Andrew Bowles from Two Moons (Goojar Goonyal), and Doug Coghran (DEC).