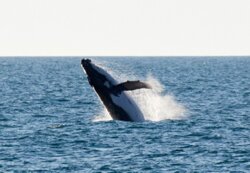 A Humpback whale calf breaches on the Dampier Peninsula

Suborder: Mysticeti – Baleen whales (from the Greek for moustache)

Humpback whales are baleen whales, filtering food through a series of bony keratin plates about 25 inches long, and named from the manner in which they ‘hump’ their backs when they dive.  Humpbacks feed by gulping huge mouthfuls of water containing krill (small crustaceans), then pushing the water out sideways through the baleen, swallowing the krill (Euphausia superba).  In one day a whale may ingest a tonne and a half of food.  Most of the humpback’s feeding takes place in summer in the cold Antarctic waters, providing enough food reserves, in the form of blubber, to last up to eight months of the year, but the whales are now thought to also be feeding in Kimberley waters.  Males are an average of 16m long, and females slightly longer at 17m.

Humpbacks, like all other cetaceans, are true mammals.  Mating and calving takes place in tropical waters from June to November, and at latitudes of between 12 and 25°S.  The northern endpoint of the migration and resting area for reproductively active whales in the population appears to be Camden Sound in the Kimberley, now a state marine park with a whale protection zone.  Calving has been recorded in Kimberley waters from south of Broome, near Eco Beach, to north of Camden Sound, with the highest percentage of calves recorded between Broome and the Lacepede Islands.

Whales make their first appearance in Kimberley waters toward the end of May or beginning of June, although the peak time of the northern migration appears to be the last week in July.  It  was previously thought that on the northern migration the whales appeared to pass to the West of the Lacepede islands, remaining offshore until they reach Camden Sound, but observations over the past few years have shown that they move in to the coast more to the south, from Eighty Mile Beach to James Price Point.   The migration is staged in terms of “maturational classes”, with lactating females first to leave the Antarctic summer feeding grounds, followed by juvenile whales (sub-adults), mature males and females and finally pregnant females. This order is reversed on the return to the Antarctic in spring, with cow calf pairs the last to leave Kimberley waters.