Richard Costin and Annabelle Sandes are Broome based naturalists and photographers who have spent the past six years on the Kimberley coast studying the Breeding Stock D population of Humpback Whales, the largest Humpback Whale population in the world.

Using high definition video, photography and hydrophones (underwater microphones), they have recorded the behaviour and markings of these magnficent cetaceans. Richard and Annabelle are firm believers in “citizen science”, inviting passengers to join them on wildlife expedition cruises to participate in recording whale numbers and behaviour.

Richard Costin grew up in southern NSW and the ACT, and after completing a diploma in Agricultural studies in WA, furthered his education as a farrier in the US specialising in veterinary shoeing.  Richard first arrived in the Kimberley in 1976 and has an unbridled passion for the coast and interior. For nearly 40  years he has lived and worked in the Kimberley, walking and exploring vast tracts of untouched wilderness by himself.  An accomplished stills photographer and documentary film maker, Richard has  released two beautiful documentary DVDs;  “Heart of the Kimberley – Wildwater Country” and “Heart of the Kimberley – Birds of Paradise”.  In June 2013 Richard released a re-edited version of “Wildwater Country”.

A true bushman, Richard also works as a naturalist on various Kimberley charter boats, sharing his extraordinary knowledge of the Kimberley coast. 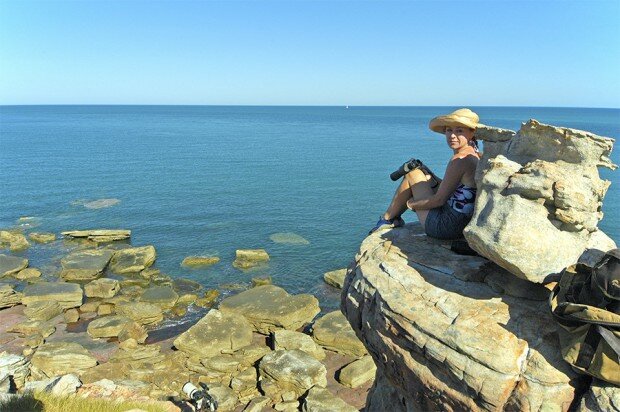 Annabelle Sandes has lived in the Kimberley for the past thirteen years, following a career in antiques and auctioneering with James R Lawson Auctioneers in Sydney.  Annabelle spent six years running “Mt Hart”, a wilderness lodge on the Kimberley’s remote Gibb River Road, where she combined her love of cooking with her passions for natural history, wilderness and wildlife. 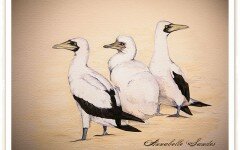 Based in Broome for the past seven years, she has concentrated on painting, photography, filming and natural history, leading  annual whale survey expeditions with Richard on the Kimberley coast.

One of Annabelle’s whale images was featured in The West Australian’s “Images of the Decade – Natural Wonders”, and in 2010 she was a finalist in the Veolia Wildlife Photographer of the Year Award at the Natural History Museum in London.   Annabelle has exhibited paintings and photographs in Sydney, Broome, Melbourne and the UK. 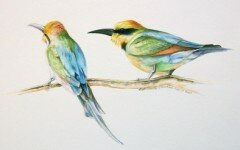