Humpback whales are the fifth largest of the baleen whales, giving birth to live young.  The whales display sexual dimorphism, with males slightly shorter than females at sexual maturity.  Males measure an average of 12.2-14.6 m with females slightly longer at 13.7-15.2 m, although whales of up to 26m have been recorded.  Humpbacks have an indistinct  dorsal ridge extending from the rostrum (snout).  The rostrum, upper and lower jaws and lips, are covered in tubercules (lumps), each containing a single hair, or vibrissa, which may aid in navigation by detecting changes in water temperature and current.

Extending from the lower jaw to the umbilicus are 20-35 ventral pleates, or grooves, which enable the whales to expand their jaws when feeding.  From the upper jaw hang 270 and 400 pendulous keratin baleen plates, which the whales use to sieve small crustaceans and bait fish from great mouthfuls of water.

The whales’ pectoral fins are approximately one third the length of their bodies, with 10 phalangic knobs along the outer surface, which correspond with the phalanges and  joints.  These long pectoral fins allow for both great manoueverability, tactile interaction. 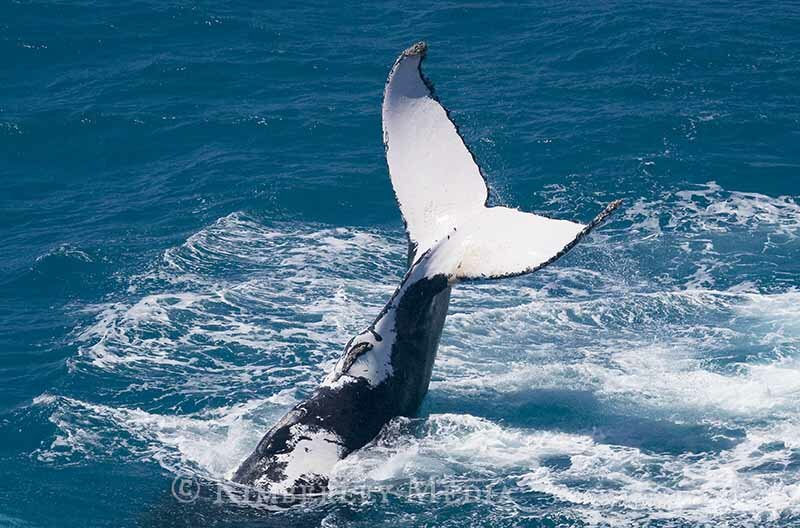 The dorsal, or upper sides of the whales is generally dark in colour, with mottling extending to the pectoral fins, underside and tail flukes.  Calves are pale grey when born and then darken with maturity.  In front of the carina, the protruberance near the caudal peduncal (the narrowing of the tail) is the anal slit followed by the genital opening and mammary slits in females, which are located on either side of the genital opening.  Females are  identified by  a ‘hemispheric lobe’.  In males, the distance between the genital opening and the anus is almost 2.5 times longer than is seen in females, with the genital opening in males more anterior than the female.